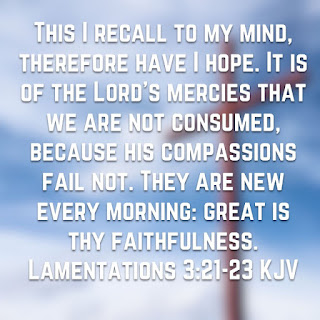 Lamentations 3:21-23 has always been in my Top Ten Favorite scripture passages.
When I read this chapter yesterday in my Daily reading... I heard Jeremiah speaking to me directly! For the first time, I realized just how amazing these three verses are, when you understand the full setting of the entire passage.
Jeremiah laments for 20 verses about his present situation.
He is experiencing horrid affliction; he is in a very dark place at this point in his life spiritually and physically.
He believes that God's hand has turned against him; he has multiple broken bones; he's been walled in by bitterness, pain and sorrow as well as literal stone walls; he feels like everyone has ganged up on him - including God; he's bound with heavy chains and shackles; God has obviously shut out his cries and prayers - literally locked him up and thrown away the key; he feels like he's been tracked down and attacked- by God! Like a bear or a lion - he's been mauled and ripped apart; God even used him for target practice - shot him in the belly and left him for dead. Those around him who have watched his demise - have used him for a laughing stock and shoved rotten food down his throat; he feels as if God has taken his face and ground it into the gravel and pounded him into the mud!
At this point - Jeremiah is ready to give up on life. He has forgotten anything good that life has to offer... even decides that GOD is a lost cause. In this pit he is in -he has nothing but time - so his mind just plays everything over and over day and night.
He remembers all of the trouble - the desperate feeling of being completely abandoned. He relives every pain and tragic loss; he remembers the taste of ashes in his mouth and the bitter poison he swallowed... he remembers hitting rock bottom and giving up.
But in the middle of all of those memories - something he knows for sure about God's love and mercy pops up.
God's mercy never runs out. It never dries up. Because its fresh and new every morning. A glimmer of Hope quickens his spirit. And in the middle of the ashes, pain and desperation - he remembers how amazing God's grace and mercy is. He stops complaining and lamenting for a moment. He takes a detour off memory lane to reflect on God's faithfulness.
"GREAT IS THY FAITHFULNESS!" he exclaimed!
Wow! Jeremiah is talking to me and you today. I have not been able to get this scenario out of my mind for the past 36 hours... so I felt driven to write this down!
No matter where you are today; no matter how dark and hopeless your situation may seem; no matter how devastating, bitter and vivid the memories of your past; no matter how LONG it has been since you felt like God was listening to your prayers - let alone answering them... allow your mind to take a detour off of memory lane.
Force your memory to bring up God's goodness and mercy. Remember the night He whispered a promise in your ear? Remember the morning on your knees when He showed you a glimmer of His vision for your life?
You can believe again! You can HOPE again! His mercy endures forever!
How? How can His mercy endure forever? Because, a new batch is baked every night and is ready for us - fresh every morning!
I am aware that the "night" you are living in may be dark and cold and lonely. But NEW MERCY is in the oven right now! When the sun comes up - wonderful, FRESH mercy will be waiting on you!
"O, taste and see, that the Lord - He is good!" Psalms 34:8
O give thanks to the Lord of lords; for His MERCY endureth forever!" Psalms 136:3
Posted by Wanda Chavis at 10:34 AM No comments:

The Power of Two

Two is an interesting number.
Its the only Even Prime number. (Remember prime numbers? A number that can only be divided by itself and 1).
Its so cool how God gave us two of a bunch of things. Two arms to hug with. Two legs to walk in the right direction. Two eyes so we can see the beauty and love around us - two ears so we can hear whats going on from any direction.
Oh yes, one is the loneliest number, but TWO! Well - Its sort of romantic! Just think of all the idioms about "two"...
Two peas in a pod
Bicycle built for Two
It takes Two to tango
Two heads are better than one
(Well… actually - anything with two heads is kind of weird)
Okay, so I have to admit - "Two" isn’t always so romantic!
There’s the terrible Twos
There’s my Two cents
Two left feet
And Two way streets
Two sides to every story
You know - Two can play the same game
You can take someone down a peg or Two
There’s Two-timers and
Two-faced people
And then we learn to stand on our own Two feet.

But the Word of God encourages us to embrace the number TWO. Matthew 18:19-20
“Again I say unto you, That if TWO of you shall agree on earth as touching anything that they shall ask, it shall be done for them of my Father which is in heaven. For where TWO or THREE are gathered together in my name, there am I in the midst of them."

Amazingly, this encouraging message from Jesus was His response to His disciples questions concerning which one of them was going to get the highest rank.

This brings me to another point...
There can be more than two - but when there’s at least TWO of us, we tend to compare ourselves - and that is a trap!
When we compare ourselves - we enter into competition.
That leads to one of two results...
Either we perceive that we are inadequate - or at least not as good as the other one.
Or we feel like we are better and above the other person.

We must remember... We are not in competition! We are on the same team and we need to be in agreement!
We wonder where the Miracles, Signs and Wonders are?
I say Miracles, Signs and Wonders are waiting on TWO of us to GET IT TOGETHER!
Jesus made it plain when he said...
"Again I say unto you, That if TWO of you shall agree on earth as touching any thing that they shall ask, it shall be done for them of my Father which is in heaven. For where TWO or THREE are gathered together in my name, there am I in the midst of them."

Peter is probably reflecting on the previous discussion with the guys about who was the most important among them... and he didn’t point any fingers - but he blurts out the obvious!
"Lord, How many times do I have to forgive these jokers? Seven times?"
Jesus blows his mind - no Pete - seventy times seven!

Perhaps Peter was trying to figure out - how he was going to find ONE other person to unite with so they could touch and agree together! Of course, it would have been great if all twelve of them could have agreed; but TWO would work just as well.

Who can you agree with - for the things you want and NEED to see happen in your life? You may have some deep disagreements with  family members or friends - but its time to humble ourselves like children and stop comparing and competing with one another!

I challenge you to find ONE other person to agree with. Grab ONE person to pray and believe with. Oh yes, a prayer team of twenty-five would be fabulous - but why wait to find two dozen like-minded prayer warriors when TWO of us can already be agreeing and touching heaven for the miraculous!
TWO of us can change someone’s destiny!
TWO of us can touch heaven for a backslider!
TWO of us can create an atmosphere where the Spirit of God and His anointing can move into our situation!
TWO can get things done! TWO can gather together and agree in Jesus name - and ANYTHING CAN HAPPEN!
It would be awesome if ALL of us could agree... but TWO will do!

The Power of Two was my Keynote Message at NCLC17

Posted by Wanda Chavis at 12:11 PM No comments: