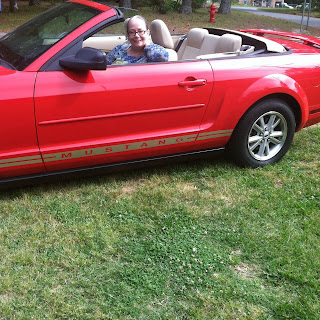 Today, my precious husband, gave me a surprise College Graduation gift. A red, mustang convertible.
Now, I know every girl in town is envious of me... I'm so blessed, excited and SHOCKED! Jeff Chavis is a very frugal guy, and for him to purchase this car for ME... well - I know it held a private message.
If you have heard my "red convertible" story - you know that for quite a while now - seeing a red convertible has been my "sign" from Jesus - reminding me to Let Him Drive!
The story is so personal - I have only shared it a couple places upon God's leading.
So here's my "Red Convertible" story...
I was at our Ladies Prayer Retreat in October 2007. My sister Debbie led one of our devotions using an illustration from a Max Lucado book about "Tucker Town" - A town where all the residents pushed their vehicles around all day - with engines running... they just liked DOING THINGS for themselves! Of course, they were tired, worn out souls, with no life! We all thought that was pretty silly - then the devotion took a quick turn and she talked about how we try to do things "in our own power". God doesn't want us to push our car around all day - nor does He want us to get in and drive it. HE WANTS TO DRIVE!
So at the end of the devotion, I was on the floor - face in the carpet - pouring my heart out in prayer... asking God to help me with the struggle to "be in control"! With all of the hats I wore and the responsibilities on my shoulders at the time, I felt overwhelmed, overworked, under-appreciated and exhausted most of the time! I was the Pastor's wife of a busy church, music director, choir leader, church pianist... just to mention a few of my duties.
I have never had a "vision" before - but that morning - I had one.
I saw a huge Bus sitting in our Church parking lot. People were everywhere - getting on and off the bus - and I could see myself there - running around with clipboard in hand - trying to create order in the chaos. I was delegating everything; from getting the tires checked to getting a logo painted on the bus. People were interrupting me, asking me questions and I seemed to have an answer for all of them. I finally walked around and started up the steps to get on the bus. I remember thinking... "I wonder if Jeff (my husband) or Brocc (my son and the co-pastor) should drive?" I knew it should be one of them, but I felt torn as to which one should be the driver. When I boarded the bus, I looked up and saw a man sitting in the seat just behind the driver's seat. His eyes bored into mine and immediately I knew... this man was Jesus. The realization made me gasp and I asked Him the craziest question... I said, "What are YOU doing here?"
Very kindly, he replied, "I'm here to drive the bus."
"YOU?" I queried, in disbelief! (I just felt like He should have a more important role than the bus-driver!)
He stood up and looked down at me - and begin to gently explain. "You know that I have plans for this Church. Prophesies have been proclaimed about my plans for your future. Much prayer has gone forth asking me to take you to a new dimension. So, I have to drive, if you want to get to the places I want to take you."
I was still confused. "But what are WE supposed to do?" (speaking of myself and my family)
His words hit me like a brick. "Just sit down, and ride."
"What? That's it? Just ride the bus like everybody else? I mean, shouldn't we be recruiting more people... or monitoring or SOMEthing?"
"No... I just need you to sit down - and ride the bus."
I began to sob - and that's what I did for the next half hour or so.

Later, I shared this vision with the Ladies group - and wept - asking them to pray for me - that I could learn to just "Sit down and ride the bus!"

As the weeks passed, it became almost comical... I would be running around on a Sunday morning with my list of tasks - stressed to the max - trying to get everything up and ready to go for service. Invariably, one of my sweet friends would saddle up to me and whisper - "Just ride the bus, Sis. Chavis!" I would laugh and joke back... "Well, the bus has four flat tires this morning, so if I don't get someone motivated, no one's going anywhere, anytime soon!"
But in prayer, I would seriously plead with God... "Lord, help me! I really don't know HOW to sit down and ride! I've been doing what I do for so long - I don't know HOW to stop!!"
Month after month passed, and my daily struggle continued. I prayed, cried and even fasted - asking God to TEACH me how to sit down so HE could drive!
In January of 2008 - we traveled down to the Because Of The Times Conference in Alexandria, LA. During one of the altar services, I crawled down between the pews and found myself again, praying my desperate prayer. I remember saying, "I don't know how to let you drive this bus, Jesus!"
And immediately - I was back in the first vision - same setting - same bus in the church parking lot - and I had the same clipboard... running around trying to get everybody on board with this project.
Out of the corner of my eye, I saw a red flash - so I turned to see what it was. Spinning into the parking lot - pulling alongside that big bus - was a Red Convertible - and JESUS was driving it! He just looked at me and smiled - then kind of tilted His head towards the passenger seat. He didn't have to say a word! I dropped my clipboard and ran around the car - opened the door and jumped in that convertible! As He popped it into gear - I remember saying, "Oh yes! I can DO this!!"
All of my frustration, confusion and struggle was gone! I got up off of that conference floor changed and relieved! I did not know WHERE He was taking me and I honestly didn't care. I just knew He was driving and I wasn't!
You see, just a few weeks after I got into that car with Him, I was diagnosed with breast cancer - and He drove me through the curvy, foggy roads of two surgeries - 33 treatments of radiation - months of uncertainty and fatigue... but it was all just a part of the scenery with Jesus driving!
My son came home from college and took over the music. Darling saints stepped up and took on responsibilities I could no longer fulfill. I had finally learned how to sit down and ride. The peace of God surrounded me like a warm blanket, as I watched leaders emerge from the woodwork. People who would have never stood up, if I had not sat down.
From that day to this - when I see a Red Convertible - my heart flutters - because it reminds me - that HE IS IN CONTROL! Sometimes, before I even realize it, I will gasp out loud! My husband has learned not to be alarmed... its just a Red Convertible moment.
So, today... when he drove up beside me in that Red, Mustang Convertible... I didn't know whether to laugh or cry! Its a lovely car that anyone would enjoy driving and owning... but to me - its more than a car. Its a message.
A message I am living - one day at a time!
I'm letting Him drive...
Posted by Wanda Chavis at 10:08 PM

Wow, that was awsome...I appreciate you sharing it with everyone! You have always inspired me with your ministry and music, you have Blessed my soul so many times.
Thank you, Sultra

Thank you so much for sharing! This was so beautiful, it brought tears to my eyes and goose bumps to my arms. I was in HI when you ministered this message. It was so anointed! My friend and I have not forgotten it. Awesome revelation from God! I think he blessed you because you were faithful in sharing and poured out your heart. Praise God!

I think of this story so often....and it still has the same effect on me as it did at ladies retreat. I am so glad you got your red Mustang, cause u truly are my mentor, and daily will remind me to "just ride the bus"... I love u, Sister Beautiful...
Amy (Georgia)

You are a lady that I have respected and admired for a long time, and I thank you for sharing this story. Your story is definitely an inspiration! I too often struggle with just "riding the bus". It is a hard habit to break, but I will let "Jesus take the wheel" because I know I can't do it alone. God Bless you Sis Chavis!--Regina (Cary,NC)

Sis. Chavis, THANK YOU for writing your story. For sometime now I have been saying, "Everybody has a story to tell", but so many times they never tell it for fear of what people will say. Your story is beautiful! I'm happy for you and your RED CONVERTIBLE! ENJOY THE RIDE! :-)

Wow Wanda. This was incredible. I'm convicted, crying, praying, and asking Jesus to take me for a ride in the red convertible. I think I'm ready to let him drive. Thanks again for speaking into my soul, Jesus through my wonderful friend, Wanda the Wonderful!

Thank you Sister Chavis for sharing that beautiful testimony. I have watched your life from a distance, and thought if anyone had it together you did. I am so proud of your accomplishments and so thankful that you are so blessed of God. Please pray for me in my future, to know what God wants for my life: And like you....learn how to let Him drive. Bless you for allowing yourself to be a blessing to so many.

In the Light of Love said...

🤧🤧😭 Oh I love you so much! What a wonderful testimony. How good God is! This is exactly what happened before I had cancer too. My former pastor wrote, "Buckle up and enjoy the ride." I am so blessed to have you in my live. You inspire me so much! I need to get my hands on your book! I also need to find the follow button on this blog. I love you so much!