I still have a copy of my son Cortt’s deployment orders for Iraq in my old Bible. One glance at that tearstained paper reminds me:

I had faith God was going to delete those orders. I believed He was going to keep my son at home! I was sure of this. I vocalized it! I thanked God daily for it!

When Cortt and his unit shipped out to Afghanistan - my faith wavered slightly - but I was convinced God would not allow him to be sent into the Iraqi war zone!

So, when that dreaded day came - and he called to tell us - “I’m headed into Iraq. I don’t know when I’ll be able to communicate again - I’ll call as soon as I can.”

For days on end - I could not - (or would not) pray. I was desperately worried and afraid - but, let me be honest… I was also angry. Why should I talk to God now? He had obviously ignored the past four months of my prayers and fasting.

I had felt so much faith! I completely trusted God to keep Cortt safely at home! WHY did I not TRUST that God would bring Cortt home safely from war?

Finally - I sobbed out my frustrations apologetically, as God revealed my trust issues. He accepted my repentant tears; and wrapped me in His arms of love and peace. He kindly and lovingly assured me - He would bring Cortt home safely; He had a plan and purpose for Cortt - even in this time of war!

However, I prayed the weirdest prayer for the next year!

Can I share this prayer with you who are praying for prodigals?

In reality - your child is also away at war - in a foreign land. Perhaps he’s missing in action; maybe she’s even a prisoner of war!

You feel this place is far from God. But is there such a place? If God is omnipresent; how can we possibly move away from Him?

In my desperation - God assured me Cortt would come home safely. So my prayers were not for His physical safety. My prayer was always for his morale - and for his mental health.

Now, if you know Cortt - he is one of the most positive, upbeat guys you’ll ever meet. Always the life of the party; outgoing and humorous. I couldn’t bear the thought of him feeling depressed or alone. We were a tight family and thinking of him laying on his cot, crying and sad, just broke my heart! These things drove me to my knees - and pulled me out of bed in the wee hours of the morning. I would intercede desperately for his morale - not understanding why. Out of curiosity, I looked up the full definition of the word “morale”:

“moral or mental condition with respect to courage, discipline, willingness to endure hardship; capacity to maintain belief in oneself and others.”

“And fear not them which kill the body, but are not able to kill the soul: but rather fear him which is able to destroy both soul and body in hell.”

I wanted my son to return home “whole”! Period!

I rebuked and threatened the enemy from damaging Cortt’s mind or causing him to question his worth or value!

I prayed against feelings of isolation, depression, and loneliness.

I prayed for his spirit to be encouraged!

As you pray for your prodigal - pray for these same things.

Cover their mind with the blood of Jesus!

Even in the story of the prodigal son; do you remember what happened to him that brought him home?

And when he came to himself, he said, How many hired servants of my fathers have bread enough and to spare, and I perish with hunger!

I will arise and go to my father, and will say unto him, Father, I have sinned against heaven, and before thee,

It was when he came to himself - that he remembered how good it was at his father’s house. He had left home - disappointed everyone - yet through it all - his morale wasn’t destroyed.

Re-direct your prayers! Your child will return home from this war; safe and sound!

Jeremiah 31:16 Thus saith the Lord; Refrain thy voice from weeping, and thine eyes from tears: for thy work shall be rewarded, saith the Lord; and they shall come again from the land of the enemy.

And now, I’ll share “the rest of the story”.

We were hosting a national conference near the end of Cortt’s scheduled deployment. He had been gone a full year - so we didn’t think it was too much to ask - could we get him home a couple of weeks early to lead worship for this event? (You have not - because you ask not, right?)

Cortt was the gunner assigned to his Lieutenant Colonel’s humvee. I wrote a letter of request with a full explanation, pleading our cause; emphasizing how Cortt’s participation in this conference would deeply influence hundreds of Native American youth in our movement.

We received the Lt. Colonel’s apologetic response shortly thereafter. He assured us it was not within his power to send one soldier back home early, while the rest of the unit was on assignment. He then went on to explain, that even if he had the authority; he would not send Cortt home ahead of the troops. His exact words were, “Cortt is the morale of this unit. He makes every mission doable - with his positive attitude and jovial spirit. I can not risk sending him home even two weeks ahead of his fellow-soldiers. This is how viable his influence is within our ranks.”

I was stunned! He used the exact word God had impressed me to pray about. His morale. I was so thankful! God had “kept” his mind whole; his body safe; and his soul saved!

I tell you, He is watching over your prodigal now - in the land of the enemy. Keep praying. Your petition may sound weird to you. Pray what the Spirit leads you to pray. Use the words God breathes into your spirit. Pray for your child’s mental health. Pray against confusion; rebuke alienation; defy depression. Pray! Pull down the stronghold of suicide. Speak life. Speak hope. Speak health. In Jesus' name…they shall come again from the land of the enemy!

(Cortt is standing - 4th from left) 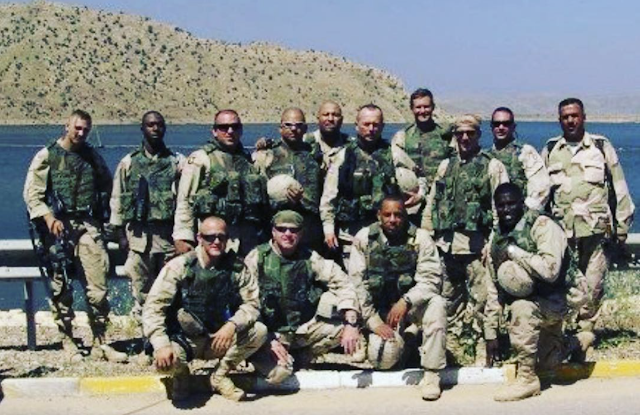 Popular posts from this blog

February 28, 2022
Do you feel overwhelmed?  Are you drowning in bad habits, health issues, or calendar chaos - and have no idea where to go for help? Every person has a life assignment; a special purpose no one else can accomplish.  Would you like to know what that purpose is? It’s not complicated or mysterious. It’s simple…  Your #1 purpose for your life is to be the caretaker of God's masterpiece - “You”.  This job is yours alone. No one else knows when you are tired, thirsty, or hungry; stressed, worried, or vulnerable. You control the level of chaos you tolerate, and you determine the quality of your life and relationships.  Unfortunately, many of us ignore the signals sent by our body; and tend to push through in high gear; but eventually, burnout hits in the form of a health crisis or a mental break.  Are you showing signs of burnout? Psychology Today says  symptoms may include: Chronic fatigue and insomnia Lack of motivation Frustration, cynicism, and detachment Forgetfulness, l
Post a Comment
Read more

Peace is the Umpire!

November 23, 2022
I recently discovered a new decision-making process. It seemed so practical - so I tucked the thought away in my mind.  A few days later, I read confirmation from the word! So, I used this method and it worked!  Let me share it with you:  This is the formula I found for decisions you need to make; or opportunities to consider.  Step One:  Write out the decision you need to make in your journal or on a notepad. Step Two: How do you feel when you think about accepting the opportunity? Think about saying “Yes, I'm going to do this”. Write out how this thought makes you feel. Step Three: How do you feel when you think about not accepting that opportunity, not going forward? Write out how you feel when you consider just backing off and saying “No, I’m not going to do this”. Step Four: Which of those decisions brought you peace when you considered your answer? My daily Bible reading brought me the following confirmation to use with these steps! Colossians 3:15 GNT The peace that Christ g
Post a Comment
Read more

Wanda Chavis
Spring Lake, NC, United States
Being raised in a UPCI church planter's home - and serving as a pastor’s wife for over 40 years - Wanda has a heart for the parsonage woman. She has developed several resources for women in ministry and hosts an online coaching group called “Leading Ladies”. Her passionate mantra is: To educate and inspire women to be courageous and proactive in their spiritual, physical, and mental health. Wanda holds a Bachelor of Science Degree in Alternative Medicine; and a Masters in Public Health Administration with a Concentration in Complementary Medicine. She owns a Thermography clinic in Fayetteville, NC; a published author, speaker, and songwriter; Wanda currently serves the NC District as Ladies Ministries President. The Chavises have three sons - Brocc, Cortt, and Kyle - all married and in full-time ministry. Family is a high priority with this family - and they especially enjoy spending time with their ten amazing grandchildren!